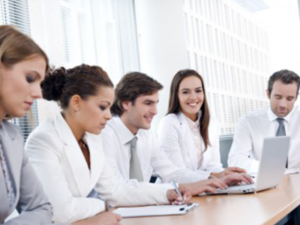 “I learned the importance of sponsorship along the way,” said Lisa Davis, Director and Global Product Manager at Citi Global Transaction Services. “And I didn’t realize what a sponsor was until I didn’t have one.”

She recalled a year when she didn’t get a promotion she was expecting. “I had the whole package – on paper – but when I asked why I wasn’t promoted, my manager said, ‘well, nobody knows you.’”

Davis, who is co-chair of Citi’s Metro NYC Pride network, said she spent the following year making sure everyone knew who she was.

“A sponsor is someone who says, ‘I’m going to vouch for this person,’” Davis explained.

Merkle-Raymond continued, “As a sponsor, you have to put yourself on the line and it comes back to your own credibility.” If the person you vouched for fails, she explained, that makes you look bad too. So, she continued, if you’re seeking a sponsor, make sure you have the skills to follow through on your responsibilities. “It means building up your own credibility so that people want to sponsor you.”

“I’ve never sought out LGBT sponsors specifically,” interjected Barbetta. “But LGBT networking can only be additive to your career development. And as you get more senior, the network of relationships you build becomes increasingly important. Having those relationships enables me to draw upon the expertise of other people in the firm – to know who to call when a new challenge or opportunity arises.”

Merkle-Raymond agreed. “BAML has a significant number of networks. And, for me, they have been critical if I end up with a problem and need to know how to solve it.”

Davis added, “Affinity networks are absolutely important and key for the business. Especially in the financial services industry.”

Schlesinger asked the panelists to discuss how they came out at work. Regnier began, “For me, it was a decision. At my previous firm, I was in the closet for two years, and I kind of felt like I was lying, or just avoiding the truth. When I joined PwC, they had a great event on National Coming Out Day and I was like, ‘Wow – all of these senior people are out. What am I afraid of?’”

She continued, “Counting people who knew and didn’t know and keeping a list takes a lot of energy.”

Barbetta agreed. “Work is stressful enough. To expend any energy or effort on hiding who you are – at some point for me, it just wasn’t worth it.” She said she gradually came out to colleagues. “When I first joined the firm, I never lied about who I was, but I just sort of withheld information about my personal life. It was a process that took time. I think for me it was about becoming more comfortable with myself, becoming more confident and mature.”

Davis said she never had an actual “coming out” event either. “When we had events, I just thought it would be okay if I showed up with my partner. I never had the notion that I needed to be strategic about it. If people found out, they found out.”

Merkle-Raymond said she had been out since starting her career. She was initially warned against it, but, in fact, being out actually provided her a boost. “I came to orientation with a pink triangle pin on my lapel, and my senior manager said, ‘You’re never going to get promoted if you tell people you’re out.’ And I said, ‘What about the five other guys who are out in our group?’”

She decided to come out at work anyway. And in fact, she continued, working on a task force to secure partner benefits at the bank in the ‘90s enabled her to meet senior executives she never would have had access to. “I was even asked to drive our CEO to the airport as a junior person,” she recalled, explaining how she discussed LGBT issues with him in the car.

Working in a Supportive Culture

“Support in the financial services for LGBT is astounding – we have come so far,” said Schlesinger. “A long way since having my bra snapped on the floor of the Commodities Exchange of New York [COMEX],” added the former trader with a laugh.

For an example of meaningful support, Barbetta pointed to the new HRC television ad featuring Goldman Sachs CEO Lloyd Blankfein declaring his support for marriage equality. “It’s fantastic that he’s doing that and putting himself out there on a personal level.”

Barbetta also mentioned the importance of straight allies for building a culture of inclusion. “The Ally Program has had a huge impact. We started inviting straight allies to join the network, and now there are gay members and straight members and you don’t know who’s LGBT or who’s an Ally, which is the entire goal of this – that it shouldn’t matter – no one cares who’s straight or who’s gay.”

She added, “From the diversity office, Lloyd himself, and various other senior members at the Firm, the support has been amazing.”