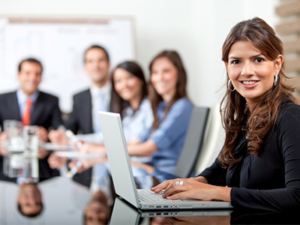 Thursday morning marked The Glass Hammer’s fourth breakfast panel for top women on the buy-side. The topic was Dodd Frank, and what’s in store for the investment management industry as we get closer to implementation.

Novick’s keynote focused on an overview of what’s happening in Washington from a buy-side perspective. “Two years ago, I couldn’t have given this perspective because there was nothing going on from an investor viewpoint in Washington,” she said, as the audience laughed.

She explained that Dodd Frank has brought unexpected and overwhelming change to the investment management industry, as well as unprecedented uncertainty. She continued, “The rules are being written by people who often don’t have experience working in our industry, and they are reaching out to the people with practical working knowledge.”

That’s why, she said, it’s so important for individuals working in the industry to voice their concerns about the legislation to lawmakers – both on their own behalf, as well as for the sake of their clients.

Novick outlined four big picture issues that are facing the industry because of the legislation. First of all, she said, it’s the sheer volume of concerns (until recently, she pointed out, BlackRock had only lobbied once in Washington – and that’s changed dramatically in the past two years). Second, Novick was concerned about the lack of investor voices regarding new regulations. “It’s hard to get clients to speak up for themselves. It’s incumbent on all of us to be talking to our clients about these things and encouraging them to speak up.”

Third, she said, is the issue of global harmonization. If the rules implemented in the US do not exist elsewhere, how will the investment industry respond? Most likely, she pointed out, by moving operations to other regulatory jurisdictions.

And finally, Novick said, the legislation has increased the cost of running a business, which, she said, will impact both shareholders and clients.

Meyn agreed. “The collateral issue is very challenging and the accounting is very challenging.” She continued, “Not all buy-side firms are prepared for this. Certainly large firms have invested in the technology. Those of us in larger firms need to help smaller firms to find the resources to leverage cloud computing [and other technologies].”

Hammer said the result of the uncertainty was related to how the legislation was written – for example, she explained, the tax portion of Dodd Frank was handed to the drafter thirty minutes before the legislation was finalized. “This does not make for an ideal draft,” she remarked.

Echoing Novick’s comments on speaking up, Hammer continued, “The debt and deficit problem means we’re all going to be paying more taxes – and that means we need to be part of that conversation now.”

Lee outlined two questions on the collateral challenge. “How is consistency going to be achieved in calculating collateral? It will be important to establish some industry benchmarks for collateral model calculators.”

“We could see a short squeeze in that eligible collateral, and we could see the cost of borrowing going up.”

Novick continued, “It’s not just a short squeeze problem but also liquid collateral may be a drag on client portfolios results.”

She said, though, that the segregation of collateral alone is not behind the cost increases associated with Dodd Frank. She said, “At the end of the day, costs will go up because of more regulation, more documentation, more collateral – there are simply more steps.”

Meyn agreed – the technology needed to implement the new regulations will be a significant cost factor. She added, “Without a common risk model, predicting cash requirements and adhering to time constraints of the dispute protocol will be difficult.”

“When Congress moves everyone into some exchange model, what happens to tax with regard to mark to market?” she asked.

“We’re still in a mode of uncertainty and we’re still writing rules – which means there’s still the opportunity to tell the treasury what you want.”

Next, Parisi asked the panel how they will deal with transparency and portability going forward. Novick said, “We’re in favor of post-trade reporting. By requesting multiple pre-trade quotes, you shift the risk from dealers onto the client. We think clients would benefit most if managers are held to a standard of best execution rather than such a proscriptive solution.”

Lee said, “On portability, the challenge is setting up any porting commitments in advance of a default.” Not only must strict parameters be set and considerations given to conditions in the market at the time, she said, “the difficulty is also assessing what sort of capital requirements there would be against such a contingent commitment.”

As far as how to implement the rules, she said, “Carefully and with a lot of lawyers.” She joked, “This is the first time in my career I’ve been popular.”

She continued, “When you really look at the rules, you’re going to see massive changes in how we conduct our derivatives businesses.”

Additionally, Novick was concerned about the derivatives rules’ impact on swaps.

She said, “It’s interesting that during the Congressional discussions on Dodd Frank this issue was raised, debated, and rejected… and now it’s back in the form of a proposed rule from the CFTC. If this rule goes forward as written, the rule will essentially eliminate swaps for pension plans. That includes LDI strategies, transition management, commodities strategies, and other investment strategies that involve swaps. And that’s a big problem.”

Parisi asked Meyn for comment on the operations angle.

Meyn said there are some challenges in terms of the amount of documentation required by the new regulations. She said, “It’s one thing to have an upfront document like ISDA, but the trade level document and infrastructural requirements for clients present some challenges.”

One bright spot for documentation, noted Hammer, is FACTA. “It uses tax rules to combat the tax shelter in connection with derivatives. It’s possible that the information used for FACTA could also be used for “Know Your Client’ in Dodd Frank.”

Finally, Parisi said, “I’d like to ask you all to look into your crystal balls. How will Dodd Frank impact your business?”

Novick began, “Everything will change in some way. Virtually every single product is being impacted in some way. Everything is going to look different, but we don’t know how it’s going to look different. Keep in mind that only twelve percent of the rules are written, which leaves 88% of the Dodd Frank rules to go, plus new legislation from Washington and Brussels. The only certainty is the need for more legal and compliance systems and staff.”

Lee said, “Clients will be very focused on how to manage an increasing collateral burden, which may be less efficient with portfolios divided between cleared and non-cleared trades and spread across multiple clearing houses. It’s going to be very important that we have innovative ways of helping our clients manage and maximize efficiencies in collateral requirements.”

Additionally, she pointed out the issue of global harmonization. “What is going to happen is that we potentially create a really fragmented market. Different jurisdictions are approaching regulation at a different pace.” For example, she said, “Asia didn’t go through the same financial crisis, and they are implementing the regulations in a different way.”

Meyn agreed. “From an infrastructure standpoint, we will see increased usage overseas when global regulations aren’t passing at the same rate. In general, the level of infrastructure work required to address the regulations is expensive and we are seeing increased outsourcing of operations.”

Hammer said we should take a broader view of the question. “What is the financial future of America? I think there is a good possibility growth is going to go elsewhere.”

“People like us need to look at the opportunities about where the best place is for us to be operating.”

Lee said, “It’s difficult for people to really grasp how global financial institutions really are. Trying to impose a US approach around the world may present some challenges.”

Novick agreed, “There is a fair amount of contact between Brussels and Washington, but those are only two jurisdictions.”

“We need to think about growth, risk, and jobs in the US, keeping in mind that money is fungible and it flows easily across borders.”